Nigel Hodson was born in Staffordshire in 1955 and educated at Tettenhall College in Wolverhampton. Having been discouraged by his father from following him into the motor trade and having no success in joining the RAF due to his eyesight, he joined a firm of Estate Agents and Auctioneers straight from school in 1973. As a pupil trainee with Skelding & Boucher he soon became more interested in the weekly furniture auctions they held than selling terraced houses in the immediate area. During 12 years with this firm, with the encouragement of the qualified partners, he developed his skills as an auctioneer and took the opportunity to specialise in the discipline by joining Biddle & Webb in Birmingham.

Selling 2000 lots a week in Birmingham for nearly 3 years was a great experience and an important learning curve. Many spectacular finds came under his gavel before a further move to work for Henry Spencers/Halifax in Ross-on-Wye brought more managerial responsibility.

This led to a move to Carmarthen with Henry Spencers/Halifax in 1991 and becoming part of a management buyout of the old John Francis Salerooms in 1992, with Captain Peter Francis. He is now, 25 years later, the sole owner and pricipal of Peter Francis Auctioneers Ltd.

He is married to Jane, now a specialist carer, having retired after a long career as a NHS Speech and Language Therapist. They have two grown up children who have their own professional careers having been educated locally in Carmarthenshire.

His interests are varied and include motorcycling, history, country pursuits and nature, classic motorsport, singing in a small choir and most of all his family and friends. Some of his spare time is taken giving talks to local charities and organisations, enjoying talking as he does. His wife says he can talk to a lamp post! 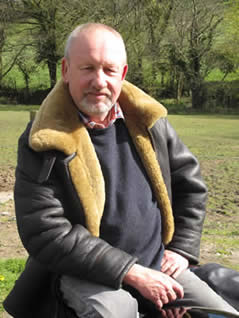