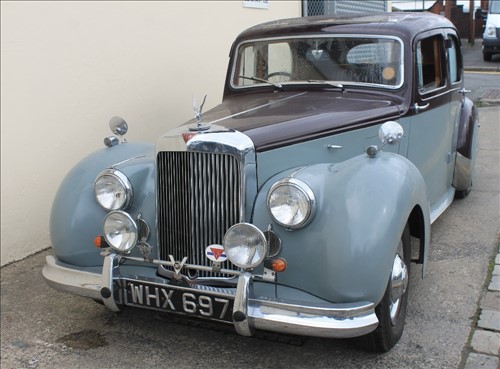 
TO BE SOLD AT 12 NOON PRECISELY: 1951 ALVIS TA21 MULLINER BODIED FOUR DOOR SALOON CAR. REG. NO WHX 697. Chassis number: 24075, Engine number: TA2124745 First registered 12th June 1951, 2993cs, 6 cylinder, manual gearbox. Although not required vehicle has current MOT expiring 24th November, 2017. Registered 85,000 miles approx. V5c document. This vehicle is consigned for sale from a deceased estate in Newport, Gwent. The car has been meticulously maintained and cherished by the previous owner as is illustrated by his insisting on an MOT when not required! The vehicle was bought in 1990 as a rusty wreck and restored over a 2 year period by the previous owners' late father, who owned the car for 26 years. Many ancillary items and accessories are included with the sale as listed in the condition report. Documentary history including many old MOTs are also included with the car. The Alvis Car and Engineering Company Ltd. was based in Coventry from 1919 to 1967, having been founded by Thomas George John as T.G. John and Company Ltd. They produced stationary engines, carburettors and motor scooters. Thomas George John was a Welsh man from Pembroke and a talented engineer and naval architect. The company became the Alvis Car and Engineering Company Ltd. in 1921. The company had an illustrious history in the manufacture of well engineered quality motor cars and built armoured vehicles during the Second World War and subsequently. The factory was badly damaged by the German bombing of Coventry during the war. The TA21 was the first model to use what became a very successful 3 litre, 6 cylinder engine produced up to when the factory ceased production in 1967. This example runs on a pair of SU carburettors. The car also features independent coil sprung front suspension with leaf springs at the rear. Lockhead hydraulic drum brakes are fitted, the first hydraulic system to be introduced by Alvis. A factory steel sun roof is also fitted. (B.P. 24% incl. VAT)