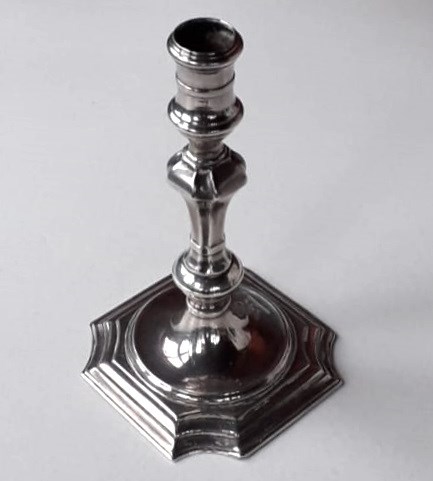 This second little missive is not about something I bought, it is a little more sinister than that. We are in the world of silver, not only a precious metal but a medium that has been used to make practical as well as purely decorative items for hundreds of years. It has always been used as a status symbol, an indication of quality as well as coin of the realm. In the reign of Henry VIII the Hallmarking Act was introduced as a form of taxation but also to protect from fakes made of substandard metal.

It is fakes where we find ourselves with this diminutive piece of silver. A small or dwarf candlestick very much in 18th century style and only 4 ¼ inches high. Small items in the world of antiques and always at a premium and this tiny taper stick turned up in a sale in Ross on Wye when I was working there, running the old Henry Spencers/Coles Knapp and Kennedy Georgian Rooms. A lovely old building full of atmosphere but little practicality as a saleroom!

The candlestick is hallmarked for George II with a full set of marks set into its base and a Welsh type Dragon on the outside of its base. We entered it into a sale catalogued as we believed it to be, 18th century English dwarf taperstick, whereupon it sold for £900 plus premium. This was before the days of the internet but the sales were widely publicised and it went to a London silver dealer. We felt that was a great result and the vendor was paid our accordingly. It took a little while longer for the buyer to receive the lot, as sometimes happens. We were shocked when he contacted us to say it was a fake, the base hallmark transferred from another item! As is policy we refunded him, at the same time contacting the vendor. Surprisingly this was difficult as he seemed to have disappeared! It had obviously been entered as a known fake by a crooked vendor.

One of many, many lessons learned over the years, fakes, and forgeries always a problem in auctions, keeping us on our toes almost every day. Latterly the problem continues to be watches particularly.

As a fake this little candlestick is not legal to sell and so of no value, sitting on my mantelpiece as a bleak reminder to be careful and to always think that if something is very good, it might not be as good as you think!