The objects that draw my interest have always been varied but there is a central theme in many cases with militaria and antique weapons being one.  However such items have to strike a chord with me and I don’t buy anything without an interesting history or provenance.

This 19th century English percussion hammer pocket pistol revealed itself to me when I opened a drawer in the bedroom of a pal’s father, after he died.  I was immediately drawn to it but, when I picked it up and turned it over it had obviously lain in the same position for many years and it was very corroded and rusted on the back.

Pistols of this type were personal protection in the 18th and 19th century and varied greatly in quality.  Earlier examples would be muzzle loading flint locks.  This one, being a muzzle loading percussion, is a later example.  The ignition of the main charge is caused by the hammer striking a brass cap fitted over a nipple, containing a second small charge which discharges into the barrel through a small hole. Then it goes bang!

This pistol is good quality with a turn off (removeable) Damascus barrel (blued steel or iron spirally wound and formed around a steel core). The type of barrel, which in this case is rifled, is very attractive, but may not be as strong as a cast barrel.  It has an engraved action and a nice chequered walnut grip.  A feature is that the trigger folds away until the gun is cocked and it also has a decorative silver blade foresight. 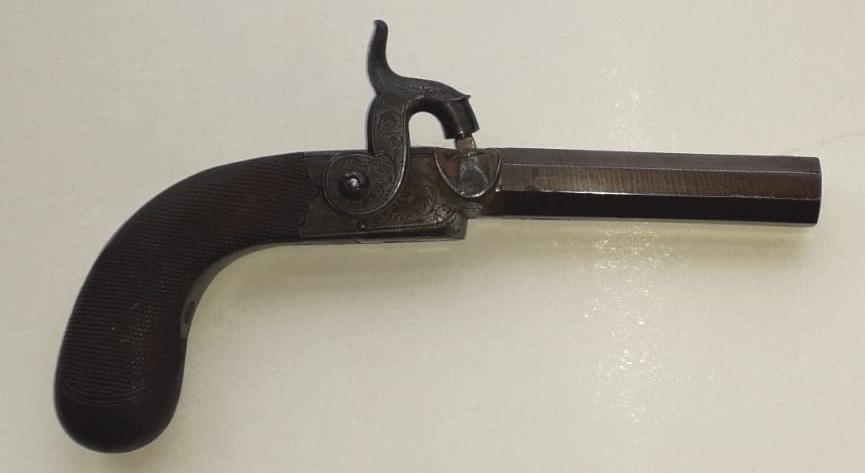 A nice example but very rusty on the back, with no makers name, and so of little interest to serious collectors.  Because I knew the former owner well and also liked the thing, I threw in a bid and bought it.  Another friend in the firearm’s world, a fascinating ex-military gentleman, very kindly improved its condition but it still bears the scars, sadly.  Value in good condition now, a good example expensive when new, would be upwards of £250, but not as it is.  I enjoy the way it handles and it reminds me of an interesting man who had some amazing cars and bikes over the years, one or two of which I sold for him and his family.