Coins are one of those Marmite collectables, mean nothing at all to you or some are absolute fanatics.  A very specialist field especially when it comes to grading condition.  I do not have that skill and nor do I really collect coins but have just picked up odd ones that I like. Mind you we do sell 100s if not 1000s of coins every year and I’m sure there are some bargains in job lots if you have the time to filter a large quantity to find one little gem worth £50!

This little gaggle is the sum total of my collection. I do know a local collector who has been buying gold sovereigns for 50 years and has been trying to get to the Holy Grail of one for every year they were produced.  I should think he started off paying less than 20 quid each.  They were around £100 for it seems like many years, and now £300 plus! 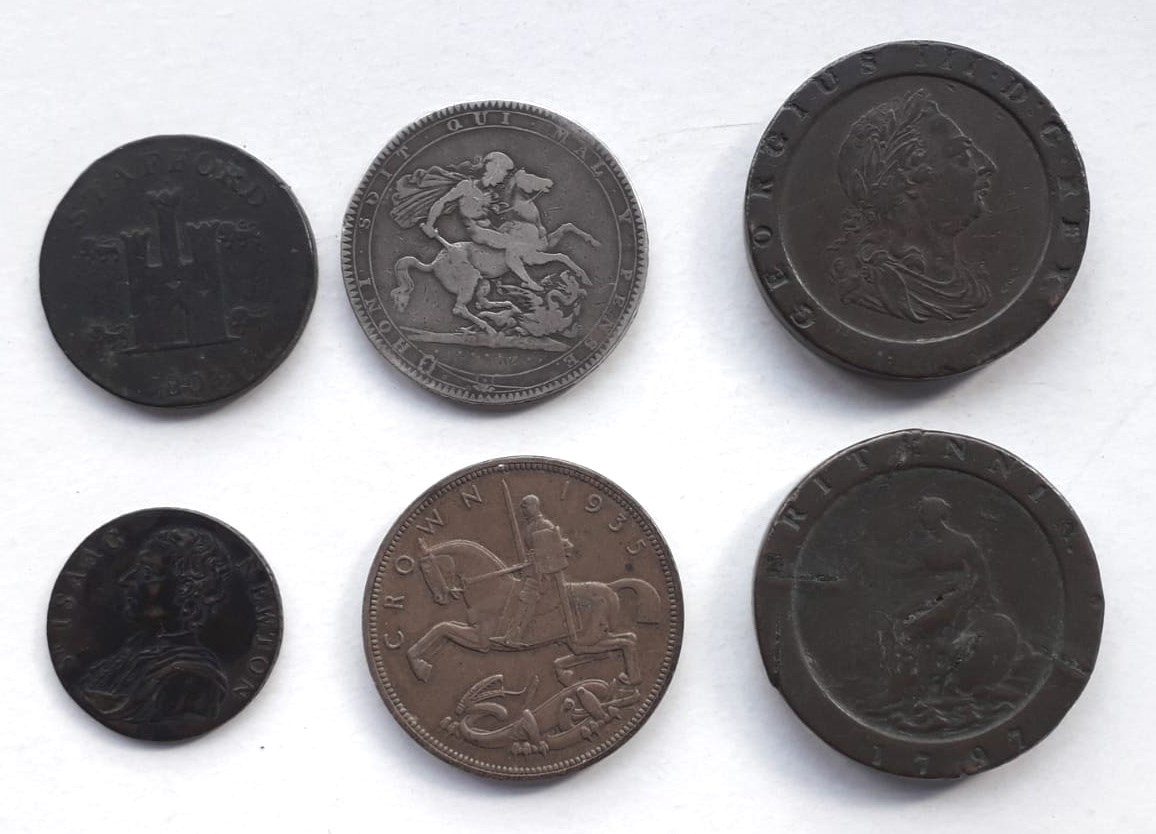 Briefly, I have two silver Crowns.  A worn George III example dated 1818 and a George V example dated 1935, better condition but dirty.  I’ve resisted dropping it in Coca Cola (it does work but think what it does to your teeth!) The earlier coin has no real significance to me and I’ve no idea how I came by it. The 1935 one is a design I like very much with a stylised Saint George and a Dragon. No great value here, maybe £40 the two I would guess.  The two big copper coins are Cartwheel 2penny pieces, only produced in 1797 having been designed by the famous Matthew Boulton with the artist Conrad Kuchler.  They were designed to weigh exactly one ounce as a way of combating counterfeits. They were immediately unpopular because of their weight and size and were only produced for a year.  As with all coins condition is everything and some versions are rare so you will see them advertised at a lot of money, well into the £100s.  Mine are not good enough to be worth anything like that.  I just find the story fascinating and every time I see one it’s a good party trick to know the date without looking!

The other two coins are tokens, issued by businesses in lieu of real money, to be spent in the company shop.  A very clever way of holding on to the firm’s funds!  The larger one is a Stafford penny with the company initials and Stafford castle; where I was born, so obviously of personal interest.  The other is an Isaac Newton Half penny token, minted in Middlesex and dated 1793; more of a commemorative item perhaps. Many of these have a die fault but this one is ok so may be rare, I’ve never researched it so one day I will!  No idea where I picked that up either, had it for years. All those copper coins may be worth £100 or so between them, just interesting and tactile.